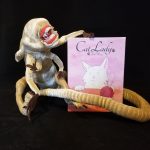 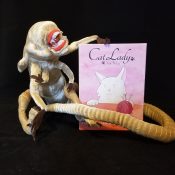 Hello, meatsicles! I’ve returned again to grace you all with more of my thoughts on silly human games. Today, I’ll be discussing Cat Lady, a 2-4 player card game from AEG. Before I get into it though, I’d like to take this opportunity to remind a certain cat named Jones that I haven’t forgotten him. He’s still on my s#!t list.

Anyway, Cat Lady takes advantage of human’s hilarious evolutionary failing – being attracted to small furry things. (Reminder: Consider birthing a furry facehugger). Cat Lady is a simple card game that shares much of its core with games like Sushi Go!, and 6 Nimmt.  With a tableau of 9 random cards to chose from, a player will either pick a row or column of 3 to add to their collection, refilling the tableau afterward. There are cat cards, food cards, costumes (You humans do love dressing your animals up, after all) and a few others. As you go, you’ll want to collect cats, but also enough food to feed them all. In addition, there are stray cats (or as I like to call them, Pringles) which you can adopt for points as well.

In the end, you get points by having fed cats, catnip, toys, costumes and strays. There’s a little more to it than that, but you get the idea. It’s a cute little game that is fun for your whole family (It makes things easier for me if you gather in one place.) The box says ages 14+, but from what I know of humans, an 8 or 9 year old could handle this easily.

Best of all, no matter who wins, I cocoon my opponents afterwards. Oh, and if you didn’t get the Pringles reference earlier, there’s an old TV slogan they used to use where they say, “Once you pop, you can’t” – oh never mind. I’ve got some eggs to lay.