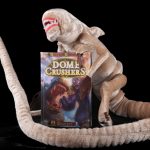 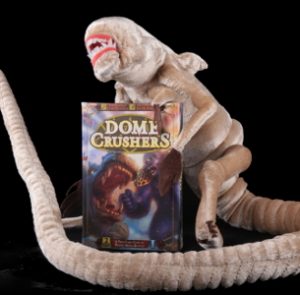 As a busy mother of thousands, I appreciate games that have a shorter playing time. Dome Crushers is a self described “tiny” game that plays in around ten to fifteen minutes, which is often all I have time for.

This game simulates arena style combat between giant beings (offensively described as “Beasts” and “Monsters” in the very obviously Human biased rule book). The game play is simple and straight forward. Each player has an identical deck of twelve cards, each illustrated with some lovely non-humans. With a hand of four cards, each player takes turns playing a card in either a vertical position for a point value or a horizontal position for an ability. Once both players have played four cards, the round ends. There’s a bit more to the rules, but not much. The game ends when either player can’t draw four cards for a new round.

As I said previously, one of the big draws of this game is its quick play time. I like its portability as I travel often and carrying 24 tarot sized cards is easy on my minions. The art on the cards is full of action and color. The design is easy and accessible. Most importantly, the game play, while not complex has much more strategy to it than might be implied by such a small game. Best of all, regardless of who wins or loses, I cocoon my opponent afterward.