Here, you’ll find interviews, discussions and opinion pieces from myself and guest writers. If you’ve got a topic or game you’d like me to cover, please contact me and let me know. My opinions, as well as those of my guest writers, are our own. 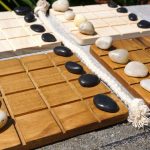 
There’s been so much activity lately with Coyote and Crow that I haven’t had much time to update everyone. In short


I’m very excited to drop this promotional piece for Coyote and Crow. The logo and graphic design work are by Barbara Schelling. Barbara is a member of the Nakoda tribe and if I have my way, she’ll be an ongoing member of this project. I really love the graphical elements and color splashes in the logo.