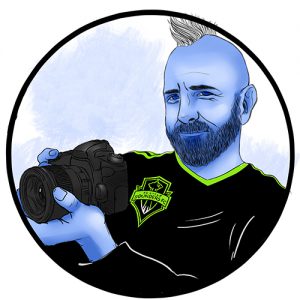 I’ve been gaming since I was a wee lad but it wasn’t until 2014 that I began working in the board gaming industry, managing a Friendly Local Game Store (FLGS) in West Seattle. Then in 2016, I began to work for a board game consolidator, and I had an entirely different perspective on the industry and the games I played.

Prior to working in games, I’ve had a strange and winding life that has included being an intelligence analyst for the U.S. Navy, a newspaper reporter, a novelist, a bartender, a DJ and a filmmaker. I’ve lived in California, Washington, Minnesota and Texas, but my true home and the place I’ve lived the longest is New Orleans. After Katrina displaced me, I moved back to California for a bit before settling into Seattle, where I’ve been since 2009.

I currently reside in West Seattle, with my amazing partner, Jen, and our two cats, River and Simon. I’m working on my fourth novel, Breach.

You can find me online on Board Game Geek

Sub-Level 03 grew out of my need to connect with others over board games. My day to day work duties, while in the industry, have put me in a spot where I’m not as involved with the community as I’d like to be. This site is my attempt to correct that.

While I hope that everyone can find something they enjoy on this site, my goal is bringing new gamers into the fold. While our community is a wonderful one, it’s got lots of room to grow. I truly believe that everything that is good about humanity can be highlighted in board games. They bring people together, they make us laugh, they inspire a sense of competition and cooperation. Board games can save the world. So, if I have one wish for this site, it’s that maybe I can make a few people change the way they view games from something they play once a year, to something they look forward to playing a few times a week.

Once I realized I had something to say, I quickly understood that I didn’t want to do just one format (videos, podcasts, etc.). Instead, I feel like the content should determine the medium. So, we’ll have a little bit of everything here. While I have a pretty wide variety of interests in gaming, you will probably quickly notice that I do lean toward science fiction themed games.

Lastly, I have a strong inclination toward diversity and I hope that I’m able to reflect that on Sub-Level 03. I endeavor to bring more women, Native Americans, non-binary folks, LGBTQIA and people of color into board gaming and to highlight their contributions to this incredible hobby.